Midfield croft is situated in Gluss and sits just a quarter of a mile or so from Gluss Isle which is joined to the mainland by an isthmus. Views to the north look out Gluss Voe toward Yell Sound and in the distance the island of Yell.

to get information on local attractions,

Eshaness plays host to some of the most dramatic coastline that is accessible by car. At the end of the road there is the Eshaness lighthouse which is still in use today and nearby there is the Holes of Scradda - a blow hole joined to the ocean by a flooded cave.

Fethaland is the most northerly point on the Shetland mainland and was also the site of a sizeable  Haff fishing station in the 18th and 19th century. There are also great views of the Ramna Stacks and Gruney.

Mavis Grind marks the beginning of Northmavine and is a narrowest point on mainland Shetland where the North Sea and Atlantic ocean are only a stones throw apart.

Ronas Hill sits on the north side of Ronas Voe and at 1450ft is the highest hill in Shetland - it can be climbed in 1 - 1.5 hrs  by parking at Collafirth hill nearby.

to get information on local amenities. 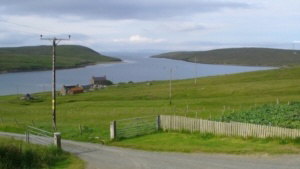 Northmavine : is the northerly part of the Shetland mainland and has some dramatic coastline, the highest hill, many fishing lochs, the longest voe and some interesting geology. Most of the coastline can be walked with some notable beaches and you will find a great variety of wildlife and flora.

The Breiwick Cafe provides a welcome stop for  for teas, snacks, lunch and evening meals are available by booking.  It also has laundry facilities and a number of serviced sites for caravans.     It is open from spring to Christmas.

The Hillswick Hotel has been on this site for over eighty years and provides bar and restaurant facilities alongside the thirty or so rooms. The building is all wooden construction and was originally shipped from Norway and operated for many decades by the North of Scotland Shipping Company.

Move cursor over thumbnail to highlight. Click for video.

Video of Gluss Voe from Midfield.

Video of views around Midfield Croft.

Video of scenes from Eshaness.

All  images, video and video soundtracks are  Copyright © 2008. All rights reserved.